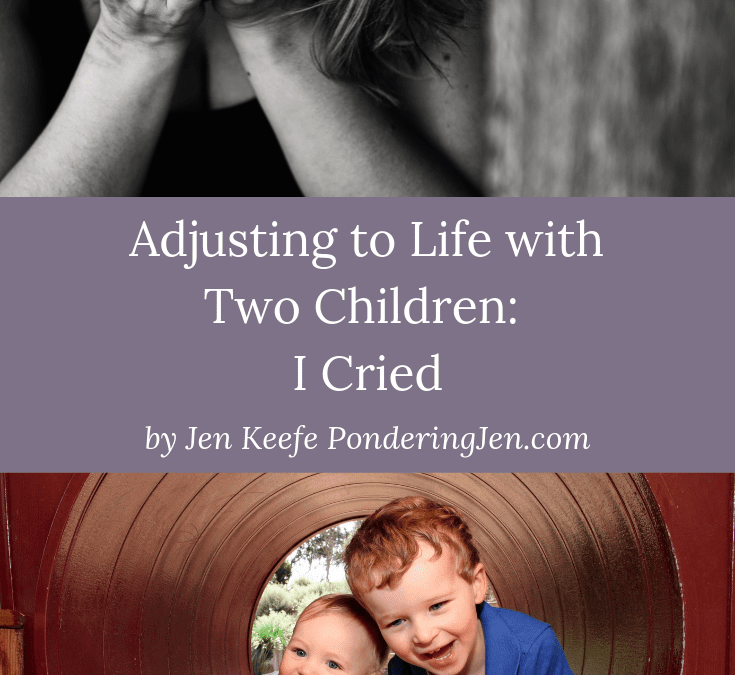 Adjusting to Two Children: I Cried

It was 7:00 on Friday and both kids were asleep.  I came downstairs, sat down and I cried.  I cried like my high school boyfriend had just dumped me.  I knew that it was going to happen.  As soon as I felt my son drift off to sleep, emotion overtook me.

My husband had been away all week.  He left on Monday to return late Friday night.  Kris travels regularly, so I’m used to it.  But, this was a long week.  The weather was unlikely in July and unheard of in September.

The rain and humidity were intense, and at my request the air conditioners had been taken out the weekend before.  Given that we bed share and nurse, the heat made it too uncomfortable for either of my two children or me to sleep.  The morning after Kris left I got a cold that quickly turned into a sinus infection.

All in all I had done relatively well while being the only parent at home, particularly with these additional challenges.  However, my “relative” is not one that I like to use for comparison.

Just after Sydney was born the adjustment to having two children was difficult for me.  There was a slight return of my postpartum depression, but mostly the hard transition was due to my total lack of ability and unpreparedness to nurture two children.

My precious, wonderful, beautiful first born whom I had given everything to before Sydney came, must have been heart broken during these months. I know with certainty that the guilt from how I handled that time will never subside.  My patience had evaporated, and my praise and adoration must have felt like a distant dream for Owen.

For the first time in his life he had been yelled at, ignored, and repeatedly ordered to be quiet.  My precious, innocent, vulnerable, trusting little boy who gave nothing but love, and trusted me fully and completely with his life, emotional health and general well-being.

I was Owen’s world and his world was ruined.

My behavior this week with Kris away reminded me of what my first baby had to go through after his sister was born.  I’ve heard that every child has difficulty adjusting to family expansion.  For my family, my child adjusted just fine, it was me who couldn’t adjust, and it was my beloved first born, who suffered the consequences.

Those who had been through it before me could pseudo counsel me that my son was “just adjusting, he would get better, things would get better.”  He was my innocent, unsuspecting, undeserving scapegoat.  But this is what they had to tell me. What else was there to say?

I cried because I can already see the love between my son and my daughter and it is the most beautiful thing I could never have imagined.  Mostly though, I cried because these gifts that I have been given, these wondrous lives that have been entrusted to me, deserve so much more than I can give them.  More patience, more nurturing, more explanation, more play time, more knowledge, more of everything wonderful, positive and beautiful in life.Things could be so easy if we had only had one child.  The bond between Owen and I would be so strong, and I can imagine the person he would be.  Still, I can’t imagine the person he would be without his sister.  And that is what allows me to eventually fall asleep at night.

After a long time, the crying subsided and I vowed that I would not let this emotion be lost.  I would store it away and draw from it the next time I was faced with the perfect storm of challenging behavior from my son, and my diminished patience.  I would remember that Owen only wanted my attention, my love, for our relationship to be what it was before.

Eventually, I did stop sobbing.  I thought about the wonderful moments of pure enjoyment Owen and I had shared earlier that day.  That while the babysitter was here I chose to take Owen with me instead of getting some desperately needed alone time and that our time was brilliant while we were together.

Somehow this dimmed the awfulness that my son endured from me over the week.  My tears, as they always do, ran out, and though my eyes remained red, I got myself together. I filed my feelings from the week away, a reserve of fuel during the next storm.

Then I opened the wine.

Making the Days Smoother: A Tip for Parents that Might Help