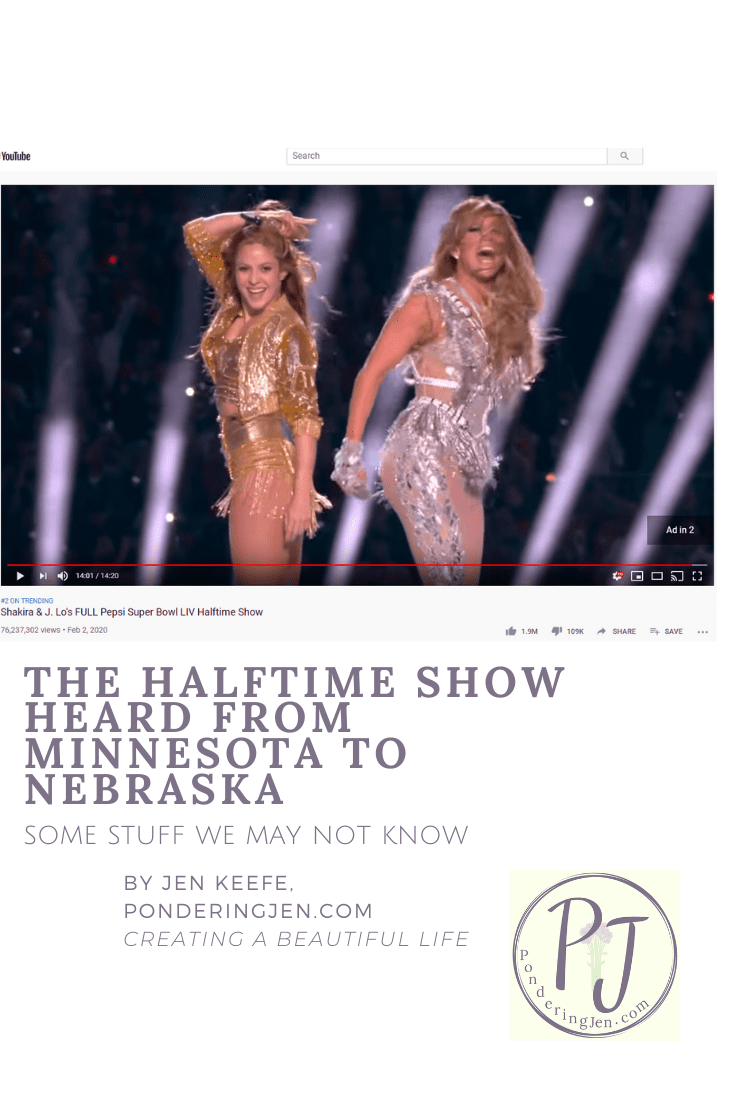 I guess I’ve come a long way. All I saw on the halftime show heard from Minnesota to Nebraska was two powerful non-white women absolutely fucking crushing it.

A decade ago I too probably would have cried old school feminist virtues. Now though? I saw two women standing in their power, embracing who they are, and in a mere fourteen minutes and 21 seconds including lots and lots of women (not normal sized women yet, but Lizzo is changing that for us and it will have a ripple effect).

Not Much of a Feminist

I don’t pretend to know much about feminism. I’ve only started embracing feminism in the last year or so. I can say, though, that with all I’ve been learning I’m starting to sense that the only way we can live in our power is to be inclusive and intersectional.

This may mean evaluating ideas that make us really, really uncomfortable- and embracing them in the interest of coming together. This doesn’t mean abstaining from our values, or watering down the strong convictions we hold, but considering that the greater our inclusivity, the stronger our power. The infighting does nothing but bring us down, it seems.

Is sex work legitimate? Is stripping or pole dancing empowering and respectable? A decade ago I would have looked down my nose and called the idea disgusting- an assault to womankind.

Now though? I understand the importance of intersectionality and inclusivity. I know, right at my core, that calling women in is better than keeping us out. I know there are circumstances, perspectives, values, and considerations I’ve never been exposed to. I understand there’s more than I know. I feel, for the first time in my life, my privilege, and my limited, sheltered life. I don’t know how I feel about sex work and stripping. What I do  know though is that there is more to  all of this than I ever knew and that I’m privileged to have lots of options.

Most importantly of all maybe, when I watched that half time show I felt nothing but pride for my fellow women on that stage. I felt inspiration and gratitude that these two women stood up there on behalf of all of us and moved their bodies in total confidence- with homage to their diverse heritage.

There is no question who held the most power in that arena during those fourteen minutes and twenty one seconds. It was Jenny from the block and Shakira. Two Latin women who commanded we see their strength. Two wildly successful women who have influence, control, power, money, and incredible dedication, perseverance, and skills. Two women who use all of this to raise up women and others who aren’t white men. Why would we, as women, or as feminists, try to shift that message?

Why wouldn’t we instead raise them up, together? What if we considered that these two women have risen through the challenges we women face- they have “made it”. They have lived every experience that holds us back collectively- and J. Lo chose to pole dance. What if instead of casting the line we’ve always held true, we pause for a moment to consider why?

What would happen if instead of trying  to control or contain their power we all cheered them on like hell? What if every single one of us chanted, consistently, that they are amazing?

Did you SEE what they did?

Did you FEEL THAT POWER?

Can you believe how lucky we are to have them standing up for us?

What if our voices were one? What if our collective message was one of support, pride, and love? It’s worth pausing to sink into that experience for a second, I think.

I have lots to learn. There’s so much I don’t know and I will rightfully be corrected on much of what I’ve written.

What I do know though is that exclusion and telling others how to stifle their power doesn’t really have a place in my feminism anymore. Are there exceptions? Of course. But if you find yourself wanting to cite examples of women using their “power” to harm, you’re stretching so far you are off track.

For those of you who are up for it, I offer you this opportunity.; if you’re in a place where you are capable, watch this performance looking only for the power. If you can, try to overcome any feelings of being offended. Just one time of watching it. Each time you start to feel upset, if you can, acknowledge it and push it aside, just this once.

See what you see. If you are able to feel the power of these two women, maybe you can consider that shift going forward, and see if it makes you consider other things differently.

You don’t have to do this, obviously. I’m really not trying to change anyone’s mind. I don’t know enough about this to have any desire to do this.

What I do know is that things are different than I though and that I’m glad I was finally open to reconsidering and learning. After all, not only am I a woman- I have a daughter. So, if you’re able, watch this show and see if you can see it from a perspective of nothing but woman power. The clip is below. Before you watch it though, there may be a few things you want to consider.

First though- there are a couple of things you may not know. You may benefit from taking a couple of minutes to learn what some of the gestures performed mean. It may change the way you see some of the performance:

1. That tongue flicking gesture. Did you know it is something called Zaghrouta and is a traditional vocal expression done to express joy in Arab cultures? Click on this quote to read:

“The Grammy-winning artist, who is half Lebanese, was letting loose a zaghrouta, a chant often raised in the Middle East and North Africa at moments too joyful to celebrate otherwise. If you’ve ever been to an Arab wedding, you’ve probably heard such an ululation. If you’re related to anyone like my late grandmother, you heard it before you went off to prom, when you aced your final exams and when you returned home after a long trip away. Call it a “yeehaw,” a “yaaass,” a “hallelujah” — whatever suits you best.”

2. Belly Dancing, Rope Dance, and Instruments we Did not Notice:

“Shakira stood up for her Lebanese heritage in a country that is still overwhelmingly defined by ignorance and misinformation regarding the Middle East. And of course, the FCC complaint database is riddled with complaints of “indecency” from last night, and although I’m sure Jennifer Lopez’s stripper pole received a solid amount of those, I wouldn’t be surprised if a good percentage of whining puritans were scandalized by Shakira’s ethnic performance first.”