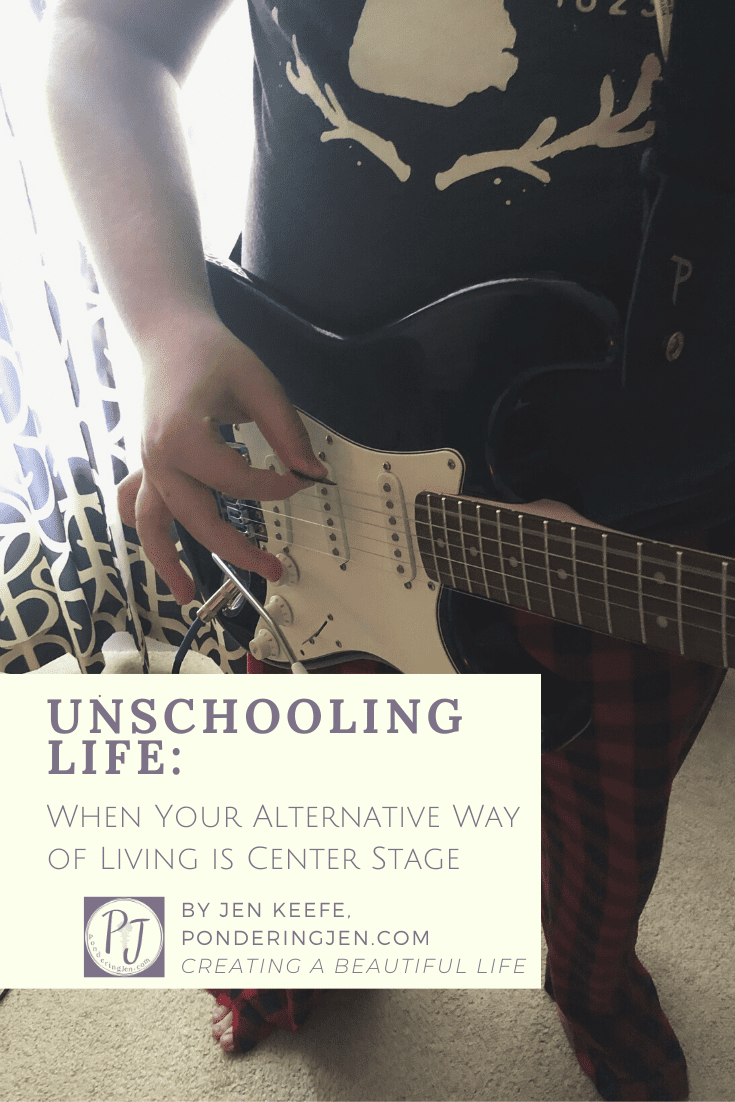 I didn’t watch them. As I heard rumblings on Monday though I put two things on my to-do list for that night. I wanted to watch Demi Lovato’s performance– I just think she is so brave- and I wanted to watch Billie Eilish accept a Grammy. So once the kids were settled into YouTube, and playing Guitar, I settled in front of my computer to watch.

As Billie’s name was called I watched her hug her mom, grab her brother, and head up onto the Grammy stage… to accept the Grammy for best new record.

The timing was particular. See, earlier that day I had wanted to sit down and write a Facebook post about something specific. I wanted to document the big appreciation I felt that day for my kids having all the hours of the day to pursue the things they love.

This appreciation came from my 12-year-old son getting his first electric guitar (the same day Billie won her first Grammy, though I would not know until the next day it worked out like that).

Why Did it Matter on this day?

I’ve been starting up my own career again now that my kids are a little older. There are several good reasons I decided to do this. As a freelancer, I am responsible for finding my own work. Doing the work itself is pretty quick, and when I have a job to record it becomes the most important part of our day, for good reason. But if I don’t have a job to record, my only work is marketing- finding my next job and following up with clients to stay top of mind.

I decided to reprioritize my career in 2020. It made sense for a lot of reasons. As an Unschooling mom, my kids are with me nearly 24/7. My role right now is to be with them and I love it. As they got older though I found myself with chunks of time throughout the day where nobody needed me for anything.

I started reading again and writing. I burned out from killing time on Facebook. It made sense for me to use that time to do something I love and want to do.

My husband left on Friday for Poland though. Normally Kris works from home. We both cook, clean, play with the kids, do laundry, etc. It’s all pretty easy with two parents around. It gives me plenty of time to work and things stay calm and peaceful.

With Kris away though, I am doing all of the things. I don’t mind. Kris’s work provides us a great life. When he travels though the time I normally have to work evaporates. Nearly every minute of the day is spent either with my kids or doing household chores. So much so, that I couldn’t even find the time to write the Facebook post about my appreciation for all the time my kids have to do the things they love.

I wanted to share how fun it is to watch my son play electric guitar for nearly 24 straight hours, barely stopping to sleep and to watch him improve in that time. I wanted to talk about how excited I am that he doesn’t have to stop playing to eat dinner at a certain time or do homework or move on to the next class.

I wanted to share the value I see in kids diving deep for long periods of time- to say that last year my son was crazy into World of Warcraft and share all the things he learned from it and that the year before that it was World War II and the year before that it was X-box (which is what led him to WW2) and that somewhere in there was a deep dive into the Revolutionary War and life after that war and so forth and so on.

I wanted to express my gratitude that my kids can deep dive into any and all of those topics for as long or short as they want. Whether Owen plays guitar for a week or a decade I believe it’s more valuable than 12 years of forced lessons.

I wanted to express my gratitude that my kids can deep dive into any and all of those topics for as long or short as they want. Whether Owen plays guitar for a week or a decade I believe it's more valuable than 12 years of forced lessons. Click To Tweet

There was so much I wanted to say and more that would have come up, but I didn’t have the time. I was tied up listening to my son learn how to play the electric guitar. I could not pull myself away from watching his perseverance, intensity, strategy, resourcefulness, and best of all, the pure joy on his face the whole time.

As much as I wanted to document it, I could not pull myself away from it to do so.

So as I snuggled my daughter who was watching YouTube with her Guinea Pig, listening to my son play Green Day, I passed on writing the post. I passed on finding my next job. I stayed in the role I’ve chosen- the one that is more important to my family than any other- helping my kids dive deep into the things they love. 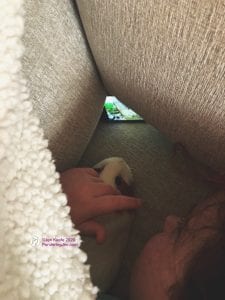 When I sat down tonight at my computer to watch the Grammy clips, more spent than usual from doing all the things, not having done any marketing to get my next job, and I saw Unschooler Billie  Eilish accept the Grammy for best new song, then turn the mic over to her brother Finneas O’Connell, who also produced this album, I became very still. Then, as Finneas (also unschooled) ended his acceptance speech and said “We just make music in a bedroom together. We still do that and they let us do that. This is to all of the kids who are making music in their bedroom today- you’re gonna get one of these” I started bawling. It was unexpected and only lasted a moment but the emotion was so intense it overcame me.

Do I want my kids to be the next Billie Eilish? Of course not. That’s why we’ve made the choices we have. We want them to live their best life- to do the things they want to do, be the people they want to be. Just as Billie Eilish and her brother have done.

Homeschooling can be lonely. Unschooling can be lonelier. Few people do it. Fewer people get it. It’s such a simple and authentic way of living as a family but the convoluted world makes it seem hard to grasp. I haven’t felt sorry for myself or wished things were different. We live in a little bubble of happiness with people who either get it or support it.

Still, to see our way of living displayed on such a societally accepted stage while my son literally made music in his bedroom next to mine put everything right back into focus in the most joyous way.

I’m still building my career and I’ll still write on Facebook but I love the reminder that I got from Billie’s and Finneas’s wins this week- that when kids are given the space, support, and resources, they can create the most unimaginable lives- whether the world gets to see it on stage or not.